In 1615, Samuel de Champlain, among others, departed for New France to explore the unknown land. As he ventured further west from his landing in Quebec, he quickly came in contact with the Huron (Wendat) and Algonquin (Anishinabe) nations and was the first European to establish relationships with these people. Ten years later, Father Jean de Brébeuf is tasked to lead the first group of Jesuit Priests to go to New France, to share the gospel of Jesus Christ to the Indigenous people. Due to his giftedness with languages, he was soon sent on the 30-day journey to Wendake (or Huronia), the land of the Wendat (Huron) on the shores of Georgian Bay, to learn the language and customs of its people and encourage them to follow the way of the Catholic religion. 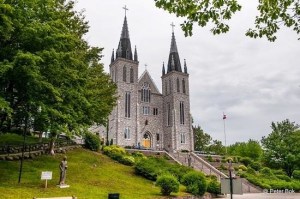 In 1639, Sainte-Marie among the Hurons was founded, as a headquarters for the Jesuit mission to the Huron-Wendat people. Over the following ten years, it would grow from one small dwelling to a small village, providing a place of rest and reflection for the priests who were living among the Indigenous villages, and a safe environment for the Huron to learn about religion and trade with the Europeans.

By 1649, social instability between the local tribes causes the Iroquois people to attack villages surrounding Sainte-Marie and take its residents as prisoners. Father Brébeuf and Father Gabriel Lalement, were among those captured and were brought to the village of St. Ignace to be tortured and killed. In 1930, almost 300 years later, Brebeuf and Lalament were canonized as one of the eight Canadian Martyrs due to the circumstances of their death.

In 1907, a shrine was constructed in Waubaushene to honor the Canadian Martyrs in a location close to where they had lived and died. A martyr is defined as “someone who voluntarily suffers death as the penalty of witnessing to and refusing to renounce a religion”. The Martyrs’ Shrine as we know it today was constructed in 1925 in Tay Township, right across the street from the reconstructed village of Sainte-Marie among the Hurons, to be a meeting place for all humanity to celebrate the spirit of those who were martyred for bringing the gospel to New France. It welcomes over 100,000 people every summer, including religious pilgrims of all faiths and ethnicities as well as non-denominational visitors. It is a place of peace and reflection, and embodies the blending of the European and Indigenous cultures.

The church itself sits high on a hill, on a large parcel of landscaped grounds overlooking the Wye Marsh, on the banks of the Wye River. From the outside, its limestone construction appears to be very European. But inside, it is extremely unique. It was built by Midland-area shipwrights with cottonwood panelling to imitate an overturned canoe or resemble the construction style of a longhouse. Within the main sanctuary, visitors will find the holy relics of Fathers Brébeuf, Lalement, Garnier, and the most recently canonized Kateri Tekakwitha.

So whether you want to learn more about Canadian history, spirituality or architecture, the Martyrs’ Shrine is a lovely place to spend an afternoon. 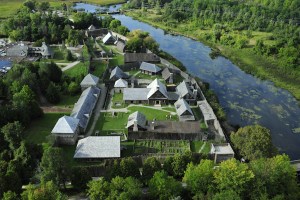 Right across the street, you will find Sainte-Marie among the Hurons, which is connected to the Martyrs’ Shrine not only by their stories, but also by a tunnel under the highway. Sainte-Marie among the Hurons was the headquarters of the Jesuit mission to the Huron people between 1639 and 1649. It has been selected as an Ontario Signature Experience to showcase the best and most unique tourism experiences in the province. Open daily between May and October, visitors can embark on a self-guided tour of the reconstructed French-style village, the Indigenous area which features a longhouse, the gravesites of two of the Canadian Martyrs, and the indoor museum. Costumed interpreters can be found in most buildings, demonstrating period tasks, and audio wands are available in 12 languages. Visit today to get a glimpse into life in Ontario’s oldest European community and one of Canada’s National Historical Sites. 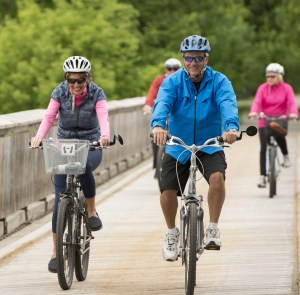 When looking for an active way to explore historic Georgian Bay, bring your bike along and cruise the Historic Cycling Route, an 8km linear trail, which brings you right to the Martyrs’ Shrine, Sainte-Marie among the Hurons and other historic locations. It also connects to the larger 150 km Simcoe County Loop Trail and other shorter loop and linear trail systems. Download a free map for information on bike repair stations, cycle-friendly businesses and more along the way. 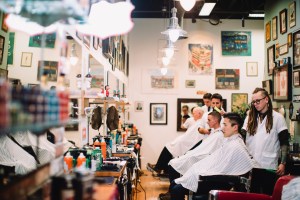 Drop by the History Barbershop Co. for an old-school barbershop experience, complete with hot towel shave and beard care and be transported to a simpler time. Enjoy a complimentary non-alcoholic beverage, or purchase an adult beverage, mingle with the other customers, sit back and relax. Now open in two locations in Midland, remember that the Downtown location operates by appointment, whereas the Midtown location is walk-in only. In both shops you’ll find a Gentleman’s Hat Shop & Supply Store where you can purchase craft pomades, shaving tools, fine aftershaves, beard care, and a variety of caps. Note that they do have restrictions on the style of cuts that they offer, so be sure to consult “The List” of classic barber shop cuts. 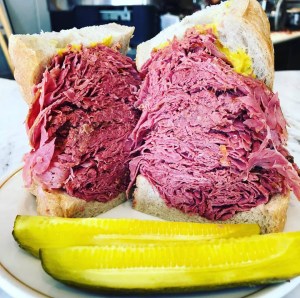 After a relaxing man-spa experience, head downtown to one of Midland’s signature lunch-spots; Dino’s Fresh Food Deli, home of the mile-high sandwich. Owner, Dino, is a fourth generation business owner on King Street and took over the current shop over 30 years ago from his father, who operated Uptown Billiards in the same location. Food being priority, we suggest pairing their famous corn beef sandwich, piled high on fresh rye bread, with their equally famous pasta salad. Other local favourites include their daily soups and steamed hot dog. But while you attempt to finish the giant sandwich, take the time to look around the restaurant and back hallway, to view the Dino’s Gallery, featuring black and white photographs of Midland’s past. And don’t forget to say hello to Dino before you go! He’s usually the one making your sandwich. 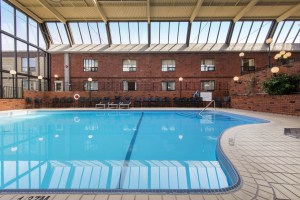 Wondering where to lay your head after a long day of exploring? The Quality Inn & Conference Centre is the only full-service hotel in the Heart of Georgian Bay and is perfectly located just a two minute drive from a cluster of historic attractions. Your stress-free stay includes the opportunity to relax in the heated indoor pool, hot tub and sauna in the Garden Atrium, complimentary hot breakfast and complimentary wifi to stay connected. With a variety of room styles, including accessible and pet-friendly options, this hotel is a great choice for any visitor. 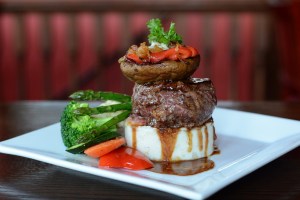