Don’t worry, you’re not the only one who doesn’t know how to pronounce Penetanguishene.

The Town of Penetanguishene (pronounced peh-neh-tangwish-een) has a deep-rooted history full of interesting characters and stories, going back hundreds of years. Penetanguishene, named by the Algonquin Abenaki tribe, means “place of the white rolling white sands” and is commonly referred to as simply “Penetang” by locals. It is one of the oldest towns in Canada, west of Quebec City, with documentation of the place dating back to Etienne Brule, a French explorer, who was sent in 1615 by the Governor of New France to live among the Huron people to establish commercial fur trade contacts. 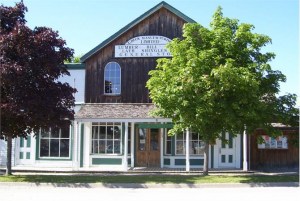 Fast forward to the early 1800s when Penetanguishene became a booming lumbering town, consistently logged until the 1960s. The Penetanguishene Centennial Museum & Archives has a permanent home in the general store and offices of the C. Beck Lumbering Co., which is one of Ontario’s oldest remaining general stores dating back to 1875. Karl Maxillian (Charles) Beck was one of the industry leaders, with an estimated worth of 12 million dollars upon his death in 1915! He famously paid his workers half in “Beck tokens”, which were redeemable at his general store and others in town. Tour the museum to see the untouched general store and Mr. Beck’s personal office to view authentic products and documents to the time.

For those interested in “spiritual” experiences, the building has been documented to be home to a few spirits, most notably Mr. Beck himself. Though the hardwood floors have been sanded down multiple times throughout history, a dark discoloration in the shape of footprints always seem to reemerge behind the counter of the historic general store.

If genealogy is your area of interest, you will find a goldmine of information in the Genealogy & History Research Center, containing over 500 genealogical files, numerous local history books and rare genealogy records from all over the country. Volunteers have spent over 30 years inputting hundreds of thousands of records into a database, and are available on Wednesdays to help in your research. Locals will joke about it, but if you look far enough back, anyone can be your cousin around here, so you may even discover that though this may be your first visit to our small town, you may have a connection to it. 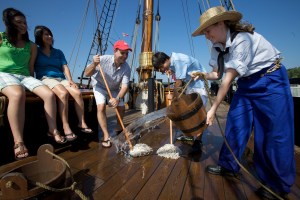 His Majesty’s Naval Establishment on Lake Huron, now known as Discovery Harbour is a historic site that traces its roots back to the 1800s. Built during the War of 1812 as a safeguard access to Upper Canada, it was home to 70 naval officers and workers whose main role was to keep British naval ships maintained and ready in case of attack from the Americans. In 1828, a garrison of soldiers were relocated to Penetanguishene to defend the Great Lakes, and occupied the site until 1856. Today you can climb on board their resident tall ships, H.M.S. Tecumseth and H.M.S. Bee, tour buildings including the original Officers’ Quarters building that was built in 1845, explore the H.M.S. Tecumseth Centre Museum, or participate in one of their award-winning special events, like Pumpkinferno, Ghost Tours, or Pirates of the Bay. 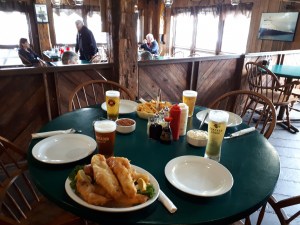 After a long day of learning about the heritage of the area, indulge in a little timeless dish. Fish and chips has long been a comfort food in the Heart of Georgian Bay, whether homemade from a fresh catch or getting it from one of the local restaurants. The name “Henry’s” echoes far and wide on Georgian Bay. The flagship fish restaurant opened on Sans Souci Island by local Metis fisherman, Henry LePage in 1978 and is only accessible by water or air. Wildly successful, a second location, Henry’s South Fish & Chips later opened in Midland, to bring the same great experience to the mainland for everyone to enjoy. Here you can indulge in a family-style meal of fresh-caught pickerel and chips on their huge patio, overlooking Canada’s largest freshwater marina. 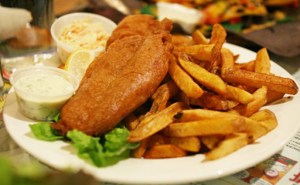 In Penetanguishene, Captain Ken’s Diner has been a staple in the landscape of the Main Street for over 40 years. Since the age of 17, Captain Ken Cowie himself has been serving up fish and chips, his famous hoagies – a fancy word for a sandwich made on a long roll, filled with meat, cheese and salad – and other comfort foods like housemade soup and seafood chowder. After recent renovations, they now have a licensed sports bar and expanded menu. So whether you like pickerel, halibut, cod, or Alaskan pollock, battered or pan fried, this is the place to get good food, friendly service and great ambience. 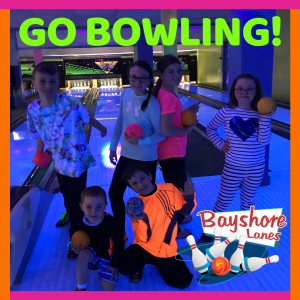 What is more fun that a little friendly competition? Visit Bayshore Lanes for a retro experience… bowling! Bowling has been a popular sport since the 1950s, but archeological findings actually date the sport back about 5000 years, to Egypt. Although Bayshore Lanes isn’t quite that old, it has operated at their current location since 1983, and has recently transitioned to a second generation of owners. Here you will find family-friendly entertainment for all ages including 12 lanes of 5-pin bowling and a licensed snack bar. Plus, the whole place can be transformed to glow-in-the-dark upon request! We recommend calling ahead to ensure lane availability. 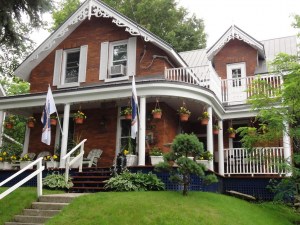 When choosing a place to stay in the Heart of Georgian Bay, it’s all about location, location, location. 1875 A Charters Inn is a lovely bed and breakfast nestled in a quiet neighbourhood just steps from Downtown Midland. Her high ceilings, beautifully landscaped gardens and old world charm will warm your heart. Your host, Gerry, acts as a personal chef and Captain, cooking up multi-course gourmet breakfast and the added opportunity to take a sightseeing or fishing charter. Book one of their three rooms, and see why this place is one of Midland’s best kept secrets.

For more information on all the great things to do in the Heart of Georgian Bay, visit www.gbay.ca