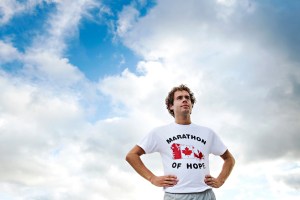 FOR IMMEDIATE RELEASE – Drayton Entertainment, one of Canada’s leading arts organizations, is pleased to announce that after a nationwide search, Nathan Carroll has been cast to play Canadian icon Terry Fox in the world-premiere of Marathon of Hope: The Musical.  The theatre production debuts in October at the St. Jacobs Country Playhouse in Waterloo, Ontario.

“Terry Fox is one of Canada’s most beloved heroes,” says Artistic Director Alex Mustakas. “In Nathan, we have found a budding theatrical star who can portray Terry’s grit and grace in a compelling way that will inspire everyone who sees the production.”

Carroll beat out a deep field of young actors from across the country to secure the coveted role. Drayton Entertainment’s national search started with open call video auditions, with an elite pool of candidates moving on to a series of auditions and call backs.

“I am beyond thrilled to have this opportunity, both professionally and personally,” says Nathan Carroll.  “I have been following the evolution of this musical for several years, and am privileged to now be a part of it.”

As the field narrowed, Carroll was asked to participate in a Toronto workshop for the musical, and it was there Mustakas knew he had at long last found his leading man.

“Beyond Nathan’s physical resemblance to Terry, he is an exceptional actor with an excellent singing voice,” he says.  “But most importantly, Nathan understands who Terry was as a person.  He sees beyond the legend to his humanity, recognizing this is an ordinary guy facing extraordinary circumstances.”

Carroll’s everyman approach to the role can be attributed to his small town childhood.  He was born in Elliot Lake, midway between Sudbury and Sault St. Marie, and grew up in Simcoe, a humble town of 15,000 near Lake Erie.

He made his theatrical debut at the age of 5 in Simcoe Little Theatre’s production of The King and I, in which his own father played the King and Nathan and his brother played two of his many sons.

“I’m still teased by my family about how horrified I was when they dyed my curly blonde hair black for the production,” he says with a smile.

Carroll grew up surrounded by music.  His father is the Music Director at a local church and his mother is a multi-instrumentalist, singer and songwriter. He performed with various choirs, in the Norfolk Music Arts Festival, and as a young member of the local high school concert and jazz bands.  He picked up the trumpet in Grade 4, and a few years later he began playing guitar, and writing and performing his own music.

As a teenager, Carroll immersed himself in the local community theatre scene, appearing in productions by the Young Theatre Players, Simcoe Little Theatre, and Simcoe Composite School.  His decision to pursue theatre as a vocation was made after a life-changing summer in the Performing Arts Program at Theatre Aquarius in Hamilton.

“I moved into a bachelor apartment at the age of 16, and nabbed the role of Anthony in a production of Sweeney Todd,” he says.  “I was hooked.”

Carroll attended the Classical Theatre Conservatory Program at George Brown Theatre School in Toronto, where he graduated in 2010.  His first big break followed immediately thereafter with a season at the Blyth Festival.

Since then, he has traveled the country, appearing in the original Canadian cast of Once with Toronto’s Mirvish Productions (2015 Dora Award for Best Production and Best Ensemble), The Wizard of Oz with Young People’s Theatre (2016 Dora Award Winner for Outstanding Ensemble – Musical Theatre Division), La Chasse Galerie with Red One Theatre Collective (2016 Dora Award Winner for Outstanding Ensemble – Independent Theatre Division), alongside many other musicals and classical works.

The role of Terry Fox speaks to Carroll personally.  His paternal grandfather, Kenneth Carroll, was a cancer researcher of international prominence, who received the first PhD granted from the University of Western Ontario.  Dr. Carroll also died from the disease.

As Carroll looks to the fall and the world premiere of Marathon of Hope: The Musical, he recognizes the need to start training – literally.

“I have completed three half marathons, and Terry Fox has inspired me to step up my training so I can finish a full marathon,” he says.

Terry Fox’s iconic marathon of hope ultimately covered 5,373 kilometres in 143 days – equivalent to 128 marathons.  The stage production examines and celebrates the tenacity of the human spirit as it chronicles Terry’s unprecedented journey.

“What Terry did for cancer awareness is forever tied to our national identity,” says Carroll.  “I am deeply honoured to be making my Drayton Entertainment debut in this exciting new musical.”

Marathon of Hope: The Musical is on stage at St. Jacobs Country Playhouse from October 5 to October 30. Developed in consultation with the Fox family, this new Canadian musical is being created by award-winning composer and lyricist John Connolly and acclaimed playwright Peter Colley, who wrote the book. Marathon of Hope: The Musical will be directed by Drayton Entertainment’s Artistic Director Alex Mustakas, with choreography by David Connolly and music direction by Michael Mulrooney.

Regular performance tickets are $44 for adults; $26 for youth under 20 years of age. Tickets for preview performances scheduled before the official opening and groups of 20 or more are $36. HST is applicable to all ticket prices. Tickets may be purchased online at www.draytonentertainment.com or toll free at 1-855-drayton (372-9866).

On April 12, 1980, at the age of 21, Terry Fox, whose right leg had been amputated after a battle with bone cancer (osteogenic sarcoma), embarked on a cross-Canada run to raise money and awareness for cancer research. To date, over $700 million has been raised worldwide for cancer research in Terry’s name through the annual Terry Fox Run, held across Canada and around the world.

For more information about Terry Fox and the Terry Fox Foundation, visit www.terryfox.org.

Marathon of Hope: The Musical is produced by Drayton Entertainment, a not-for-profit organization operating seven live theatres throughout the province of Ontario and entertaining an audience exceeding 250,000 annually.  The season playbill consists of an eclectic mix of Broadway musicals, comedies, family programming, and original works produced by Canadians and/or featuring Canadian content. The theatre company is regarded by the Canadian Actors’ Equity Association as one of the largest employers of professional artists in the country.

The musical will play at the St. Jacobs Country Playhouse, which is located west of Toronto and within an hour and a half of Niagara Falls in beautiful Waterloo Region.  The 400 seat theatre is situated in the heart of St. Jacobs Country, a popular tourism mecca with 1.5 million visitors annually. Canada’s largest year-round Farmers Market and the charming village of St. Jacobs are located close by. For more information about Drayton Entertainment, visit www.draytonentertainment.com.